Dividing Political Power among People(s): A New Federal Theory for the Twenty-First Century 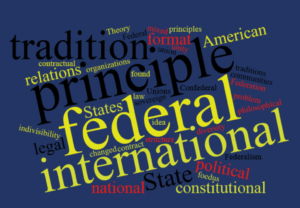 Federalism for the 21st Century

It was the 19th century myth of the monolithic power of the State that put the federal principle into a medieval slumber from which it was not to awaken in the 20th century. Despite an unprecedented upward transfer of power to the international sphere and a – parallel – downward decentralisation towards the regional sphere, the normative idea of sovereignty continued to reign supreme. But if the State was too small for the big social problems yet too big for the small ones, what does this mean for our normative theories? But would these modern social developments not eventually challenge our traditional legal theories? Contemporary international and constitutional theory is still not able to deal with non-sovereign subjects.

This theoretical blindness is particularly pronounced in international law, but the same holds true for mainstream constitutional law thinking within States. Two examples may illustrate this point. First, the United Nations (UN). Founded in 1945 as an international organisation to facilitate international security and peace, the UN has had to deal with a “new world order” in which sovereign States are seen as operating under the authority of international law and in which non-sovereign subjects also needed to be accounted for. Today the UN Security Council issues resolutions dealing with non-state subjects, such as (suspected) members of terrorist networks. And an international norm addressing individuals escapes the classic categories of international law. A second illustration for the theoretical blindness towards non-sovereign subjects comes from constitutional developments within States. When the United Kingdom decided in favour of political “devolution” in 1997/98, the erection of political authorities in Northern Ireland, Scotland, and Wales was not conceived to challenge the constitutional orthodoxy of “Westminster sovereignty”. But is this “official” justification truly convincing in light of the existence of regional parliaments with “real” “political” power? Should the coexistence of a Scottish parliament alongside the Westminster Parliament perhaps better be seen as an expression of political and constitutional federalism?

Why are federal categories totally absent from an analysis of these – international and subnational – vertical power structures?