From the “Closed” to the “Open” Commercial State:
A Very Brief History of International Economic Law 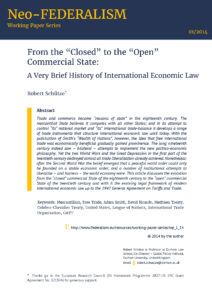 Abstract
Trade and commerce became “reasons of state” in the eighteenth century. The mercantilist State believes it competes with all other States; and in its attempt to control “its” national market and “its” international trade-balance it develops a range of trade instruments that structure international economic law until today. With the publication of Smith’s “Wealth of Nations”, however, the idea that free international trade was economically beneficial gradually gained prominence. The long nineteenth century indeed saw – bilateral – attempts to implement the new politico-economic philosophy. Yet the two World Wars and the Great Depression in the first part of the twentieth century destroyed almost all trade liberalisation already achieved. Nonetheless: after the Second World War the belief emerged that a peaceful world order could only be founded on a stable economic order; and a number of institutional attempts to liberalise – and harness – the world economy were. This article discusses the evolution from the “closed” commercial State of the eighteenth century to the “open” commercial State of the twentieth century and with it the evolving legal framework of modern international economic law up to the 1947 General Agreement on Tariffs and Trade.

The Relevance of Constitutional Law 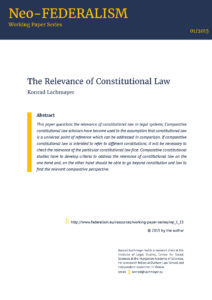 Sincere Cooperation and Respect for National Identities:
The Unitary and the Pluralist Twists of the European integration process 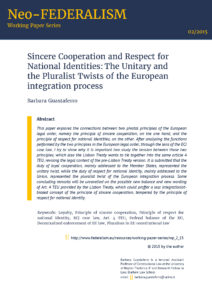 Abstract
This paper explores the connections between two pivotal principles of the European legal order, namely the principle of sincere cooperation, on the one hand, and the principle of respect for national identities, on the other. After analysing the functions performed by the two principles in the European legal order, through the lens of the ECJ case law, I try to show why it is important two study the tension between those two principles, which also the Lisbon Treaty wants to tie together into the same article 4 TEU, revising the legal context of the pre-Lisbon Treaty version. It is submitted that the duty of loyal cooperation, mainly addressed to the Member States, represented the unitary twist, while the duty of respect for national identity, mainly addressed to the Union, represented the pluralist twist of the European integration process. Some concluding remarks will be unravelled on the possible new balance and new wording of Art. 4 TEU provided by the Lisbon Treaty, which could proffer a less integrationist-biased concept of the principle of sincere cooperation, tempered by the principle of respect for national identity.

Two-and-a-half Ways of Thinking about the European Union 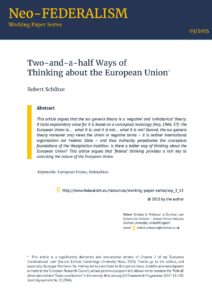 Abstract
This article argues that the sui generis theory is a ‘negative’ and ‘unhistorical’ theory. It lacks explanatory value for it is based on a conceptual tautology (Hay, 1966, 37): the European Union is… . what it is; and it is not.… what it is not! Second, the sui generis theory moreover only views the Union in negative terms – it is neither international organisation nor Federal State – and thus indirectly perpetuates the conceptual foundations of the Westphalian tradition. Is there a better way of thinking about the European Union? This article argues that ‘federal’ thinking provides a rich key to unlocking the nature of the European Union. 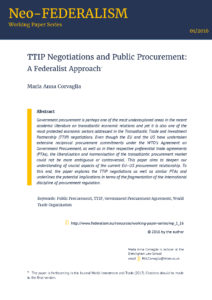 Abstract
Government procurement is perhaps one of the most underexplored areas in the recent academic literature on transatlantic economic relations and yet it is also one of the most protected economic sectors addressed in the Transatlantic Trade and Investment Partnership (TTIP) negotiations. Even though the EU and the US have undertaken extensive reciprocal procurement commitments under the WTO’s Agreement on Government Procurement, as well as in their respective preferential trade agreements (PTAs), the liberalisation and harmonisation of the transatlantic procurement market could not be more ambiguous or controversial. This paper aims to deepen our understanding of crucial aspects of the current EU–US procurement relationship. To this end, the paper explores the TTIP negotiations as well as similar PTAs and underlines the potential implications in terms of the fragmentation of the international discipline of procurement regulation.

Speaking the State: Collective Personality, Legal Subjecthood and the Creation of States in International Law 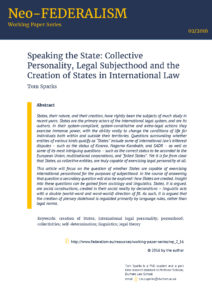 Abstract
States, their nature, and their creation, have rightly been the subjects of much study in recent years. States are the primary actors of the international legal system, and are its authors. In their system-compliant, system-constitutive and extra-legal actions they exercise immense power, with the ability vastly to change the conditions of life for individuals both within and outside their territories. Questions surrounding whether entities of various kinds qualify as “States” include some of international law’s bitterest disputes – such as the status of Kosovo, Nagorno-Karabakh, and SADR – as well as some of its most intriguing questions – such as the correct status to be accorded to the European Union, multinational corporations, and “failed States”. Yet it is far from clear that States, as collective entities, are truly capable of exercising legal personality at all.

This article will focus on the question of whether States are capable of exercising international personhood for the purposes of subjecthood. In the course of answering that question a secondary question will also be explored: how States are created. Insight into these questions can be gained from sociology and linguistics. States, it is argued, are social constructions, created in their social reality by declarations – linguistic acts with a double (world-word and word-world) direction of fit. As such, it is argued that the creation of plenary statehood is regulated primarily by language rules, rather than legal norms. 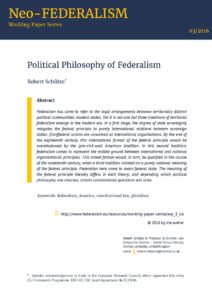 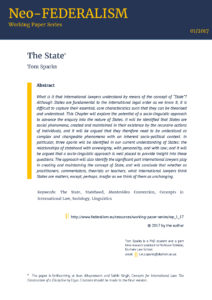 Abstract
What is it that international lawyers understand by means of the concept of “State”? Although States are fundamental to the international legal order as we know it, it is difficult to capture their essential, core characteristics such that they can be theorised and understood. This Chapter will explore the potential of a socio-linguistic approach to advance the enquiry into the nature of States. It will be identified that States are social phenomena, created and maintained in their existence by the recursive actions of individuals, and it will be argued that they therefore need to be understood as complex and changeable phenomena with an inherent socio-political context. In particular, three aporia will be identified in our current understanding of States: the relationships of statehood with sovereignty, with personality, and with law; and it will be argued that a socio-linguistic approach is well placed to provide insight into these questions. The approach will also identify the significant part international lawyers play in creating and maintaining the concept of State, and will conclude that whether as practitioners, commentators, theorists or teachers, what international lawyers think States are matters, except, perhaps, insofar as we think of them as unchanging.

Whose Claim, to what Right?
A Taxonomy of the Self-Determination Genus 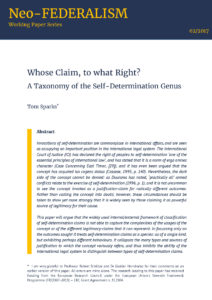 Abstract
Invocations of self-determination are commonplace in international affairs, and are seen as occupying an important position in the international legal system. The International Court of Justice (ICJ) has declared the right of peoples to self-determination ‘one of the essential principles of international law’, and has stated that it is a norm of erga omnes character (Case Concerning East Timor, [29]), and it has even been argued that the concept has acquired ius cogens status (Cassese, 1995, p. 140). Nevertheless, the dark side of the concept cannot be denied: as Duursma has noted, ‘practically all’ armed conflicts relate to the exercise of self-determination (1996, p. 1), and it is not uncommon to see the concept invoked as a justification-claim for radically different outcomes. Rather than casting the concept into doubt, however, these circumstances should be taken to show yet more strongly that it is widely seen by those claiming it as powerful source of legitimacy for their cause.

That conclusion has, of course, significant implications for the international legal system. In rendering both the forms and the justification narratives of self-determination claims more readily distinguishable, it enables claims of different kinds to receive different legal treatment. There are indications that, in the coming years, the already significant role self-determination plays in international affairs may increase, including in some of the most unstable and contested regions of the world. A renewed focus on the idea of self-determination and of the claims it can represent is therefore timely.